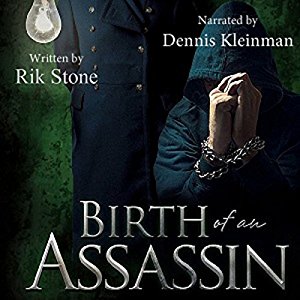 Set against the backdrop of Soviet, post-war Russia, Birth of an Assassin follows the transformation of Jez Kornfeld from wide-eyed recruit to avenging outlaw. Amidst a murky underworld of flesh-trafficking, prostitution and institutionalized corruption, the elite Jewish soldier is thrown into a world where nothing is what it seems, nobody can be trusted, and everything can be violently torn from him.

Given the order to disperse and arrest a crowd of Jewish demonstrators, Jez breaks up the rally but finds his sisters in their ranks. Rushed for a solution, he sneaks the girls from under the noses of secret police and hides them in downtown Moscow. But he knows they will no longer be safe in Russia and that his own security has been compromised. His plan to cross into the Ukraine to a port on the Black Sea where he can bribe passage from Soviet soil for his sisters seems sound, but he is unaware that his every move is being observed and that he is setting in motion a chain of events that will plunge his life into a headlong battle just to stay alive.

My original Birth of an Assassin audiobook review and many others can be found at Audiobook Reviewer.

Just after WWII, Jez Kornfeld, a young Jew whose maximum aspiration in life is joining the army, is wrongly led to the KGB headquarters when asking for the Red Army. He makes a good impression there and has a successful career. But in helping his family he will lose part of the privileges he had, and soon he will be involved in a case of prostitution and corruption, in which his own life will be in danger.

It took me a while to get into the story, but once I did I was hooked. This is an action packed thriller with interesting characters and an amazing plot, always moving forward, and with several twists and turns. This was not my typical book and I was afraid that I could have troubles to enjoy it, but I absolutely loved it.

We fist meet a fifteen year old Jez, still so young and full of illusions. His main goal in life is joining the army. The novel covers around twenty years, and in that time we witness a profound evolution in Jez. From that naive boy who joined the army, Jez became a real assassin, killing more easily each time. There will be a point which seems of no return for him, and he will have to challenge his wishes and beliefs.

There is a nemesis in this book, an evil character which will try to end Jez. He has his weak points too, he is human; but I really enjoyed how wicked he was, while still keeping it real.

And there is love too in this book. Yes, this book has it all! As you know, I am not keen on romance per say, but when it is so seamlessly intertwined with a story, and although important, it is kept on a second plane, I think it can give an extra layer of depth to the story. Here it helps to complete Jez’s picture and makes the story more polished.

Dennis Kleinman’s style perfectly suited the book. His voice and performance made me feel I was a witness to the story. He trapped me into it and I could not let it go. His interpretations were also spot on but I missed some more variety of voices. Sadly all characters sounded the same except for women. This is the only drawback for me, since all the other aspects of the narration were superb and the audio production was perfect.

As I have previously said, this book has it all: action, treason, corruption, friendship, and love. It is very well written and will delight everyone, even those who are not into military thrillers. I am looking forward to books two and three.