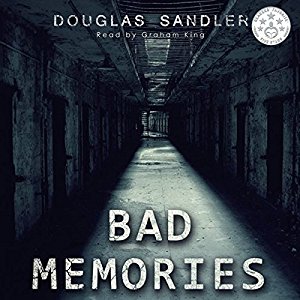 My original Bad Memories audiobook review and many others can be found at Audiobook Reviewer.

John Miller is a man escaping from his past. Former doctor working at an asylum, three patients there died there because of him. Now he is working in a pill factory, but misses his years of practice. He receives one day a call from his friend Albert to go on a fishing trip, but when Miller goes to meet him, he finds Albert dead. Miller will have to find out what happened to his friend, but his past is chasing him and some will find him capable of killing again.

This mystery book reminded me a bit of Cluedo. Several people in a house, everyone suspecting from the rest and then the deaths start to happen. Miller’s personality is a complex one, and more than once I found myself wondering if he was completely sane. It is not clear when the story is set, since there are no time references, but the way women behave and are treated may indicate 50s or 60s. Either that or Sandler is a misogynist. There are a couple of disturbing sentences in the book, like: “Her voice was deeper and more authoritative than any woman’s had the right to be”. There are three female characters in the book, but they are either mean or passive, and the main female character is clearly the typical damsel in distress.

The story is well built and I did not see the murderer coming. I had changing suspicions all along but I never suspected from who the murderer really was. Sandler knew how to build the intrigue and the psychological mystery, to make us suspect even from Miller.

The narration is what ruined the book for me. Graham King does not really make an effort at clearly articulating words and sentences, which makes the listener to be paying extra attention. All the voices plus narration sounded the same, except for two old characters. The difference was clear on these two but not on all the others and I wonder why. There was no difference in voices for female characters, which made the book very confusing and had me zoning out all the time. It was terribly difficult to pay attention to the dialogs and story, and at points I did not care any more. There were also a lot of editing issues, mainly repeated takes. I usually specify where in the book it happens, but in this occasion I found this issue fourteen times in total (in a less than five hours book), and one of those times there were three takes together. I may pass it once, but not this amount of times. Didn’t King listened to his edited audio after working on it? The first time this happens is on the tittle, which is very noticeable and inadmissible.

I think this book is very good, and I say I think because the issues with the narration have prevented me from enjoying it at all. I don’t think an audiobook with these issues should be published, and I encourage Sandler to review it and get a new audio release.