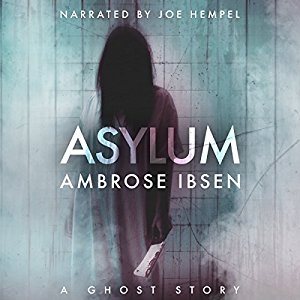 What lurks within Chaythe Asylum?
College professor Stephen Barlow needs cash. Badly. When a student asks him to head a new campus organization that centers around paranormal research, he puts his skepticism aside and signs on in the hopes of scoring a fat bonus.

Enter Chaythe Asylum—a long-shuttered and controversial institution where patients were allegedly subjected to unethical experiments. Closed in 1989 after a series of grisly murders, Stephen deems the old building as good a place as any to explore the possibility of the supernatural and arranges to take a tour with his students.

But it turns out that the asylum is not as abandoned as it seems. There is something sinister in the building. It has watched and waited for nearly three decades, and when Stephen and his students enter, they find themselves at the center of a nightmare 28 years in the making.

ASYLUM is the first novel in the Afterlife Investigations trilogy.

One of Stephen Barlow’s students convinces him to get involved in a student organization in which he is not very interested, but there is a bonus at the end of the semester, a money that he desperately needs. The organization’s goal is investigating about the afterlife, and Barlow is an sceptic; but some strange events start happening in the professor’s life, and this will push him, and the other two members of the organization, to visit an old closed asylum where some murders took place in the 80’s.

When starting a book written by Ibsen I am ready for a good ghost story. He is unique in creating the right atmosphere and get the reader interested in the story. I do not believe in ghosts, but there is something in Ibsen’s stories that inevitably traps me and makes me want to know more.

His characters are very well depicted, they are alive, and this is part of the success of his stories. We have three main characters here: Stephen, Elizabeth, and Jake. The first two are the ones that drive the story forward. Jake is used as a literary device to antagonize Stephen and introduce nuances into story at some points. The book could have done without him, but by including him, Ibsen has created a richer story.

The book starts a bit slow, but I really enjoyed how the characters and their circumstances were presented. It helped in giving depth to the book and make the characters more vivid.

The story slowly builds up the tension, and from a point I was so intrigued that I could not stop listening. From there there is no pause for Stephen and the two students, and strange events will happen until they reach the end.

The book ends on a cliffhanger that almost got me pulling my hair out. After going with our three characters until the end of the story, there are still more mysteries that need to be investigated; and Ibsen left us with the intrigue. It is the only negative aspect I found in the book. I tend to dislike that ‘to be continued’ feeling, but that just means that I am ready for the next book in the series.

Joe Hempel’s narration was a wonderful addition to this book. Hempel narrating skills give an extra dimension to the story, making the listener able to really see the story like if we were watching a movie. Each character is interpreted in a unique way, and all voices sound different. All this is done in a very subtle way, which makes the experience a very enjoyable one.