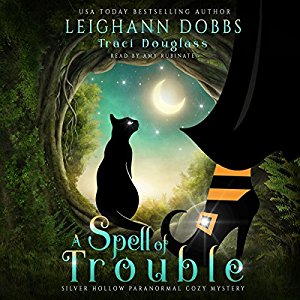 I have received a copy of this book in audio format from the publisher in exchange for an honest review.

Isolda Quinn and her cousins are what they call paranormals, a group of people with special powers: some are witches, others are werewolves and such. They live in the small town of Silver Hollow and they are very protective towards themselves and about keeping their powers secret, to avoid attracting the eyes of the FBPI, a department within the FBI specialized in witch hunting. This is why when Louella Drummond drops deed just in front of Isolda’s pet shop, clearly with signs of black magic, the cousins decide to investigate the murder by themselves and try to convince the authorities that Louella’s death was a simple accident. But none of them imagined that some of them were going to be considered suspects, and the FBPI alerted. They will need to find the culprit without being caught by the FBPI and avoid being killed.

I am picky when listening to fantasy, since I need to find the idea original and the premises somewhat believable. I loved the atmosphere of this book, the little shops each of the cousins had in Silver Hollow, and the wonderful names they had. The main character here is Isolda, and even though this character is not completely developed, we get a clear image through descriptions and her attitude towards animals and her family. The rest of the characters were quite plain, and the distinctive marks were their appearances and the kind of each’s business. It was enough in this case, since I would imagine this book targeted to a younger audience.

And talking about that, I think this is the reason to include the sudden romance scenes and the impulsive thoughts of the characters involved in them. This romance did not add anything of importance to the story, but helped Isolda during the investigation. I tend to dislike romance without a solid reason in books, but fortunately this one was brief. There are no sex scenes, as it would no be appropriate in a book for younger readers.

I liked how the plot was build, and there is a twist almost at the end that increases the interest of the story. What did not work for me was the reasons for having Louella killed. It was all a bit vague and did not get me completely invested in the story.

I have to point out that Isolda, who owns a pet shot and has exotic animals in his charge, mentions that salamanders are reptiles, when they are not. They may look like reptiles, but they are in fact amphibians. A little investigation would have prevented this mistake.

I enjoyed Amy Rubinate’s narration. Her soft voice and characterizations were very pleasant to the ear, and the character’s voices were different enough to be able to follow conversations.

I think this would make a great book for teenagers, even though I am not sure if the motives for Louella’s murder would be interesting enough for this age group.