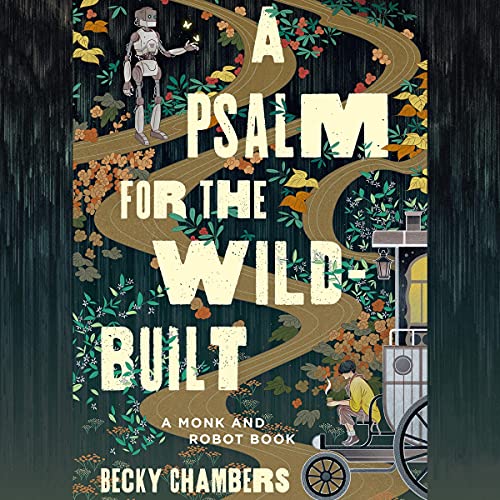 Hugo Award-winner Becky Chambers's delightful new series gives us hope for the future.
It's been centuries since the robots of Earth gained self-awareness and laid down their tools.Centuries since they wandered, en masse, into the wilderness, never to be seen again.Centuries since they faded into myth and urban legend.
One day, the life of a tea monk is upended by the arrival of a robot, there to honor the old promise of checking in. The robot cannot go back until the question of "what do people need?" is answered.
But the answer to that question depends on who you ask, and how.They're going to need to ask it a lot.
Becky Chambers' new series asks: in a world where people have what they want, does having more matter?

I was looking forward to listening to this audiobook after loving the Wayfarer series. This is a completely different book though. Humans live in a post-technological era after robots have been granted their freedom and not seen for hundreds of years. This is the story of Sibling Dex, a monk who abandons his old life and decides to start anew and do something else. During their journey, they will meet a robot. It’s the first encounter in many years, and they will both learn much from each other.

This book is technically sci-fi but it feels more like a fable, in how the story is told and how the characters are depicted. It was a peaceful and relaxing listen, like Becky Chambers’ other books.

I was a bit confused at first, as usually in other books by Chambers, when a character had no gender, she created a special pronoun for them, but it was not the case here, and for a little while I was not sure if we were dealing with one character or two. It’s not that I don’t know that some people prefer this pronoun, and it’s often used, but knowing Chamber’s style, it caught me a bit off-guard.

This novella is deeply philosophical but also light at the same time. It talks about life, death. It was a gust of fresh air, something I needed to hear in these crazy times when it seems you can’t stop and think, just enjoying being alive. I just wish the book was longer and had a clear conclusion. It’s one of those books that are conceived as part of a series from the start.

I missed Patricia Rodriguez’s narration from the Wayfarers. Emmett Grosland did a good job but I found the narration a bit unexpressive and her tone somehow condescending, like if she were reading a fable to a child. I guess this style went well with how the book was written but I was not so fond of it.