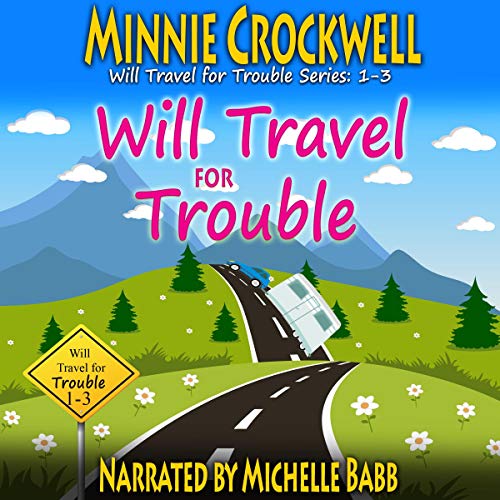 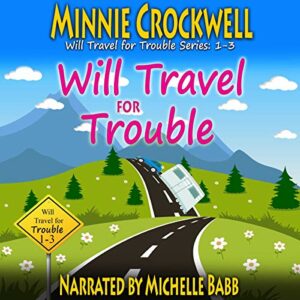 Boxed set of the Will Travel for Trouble series of short cozy mysteries, Books 1-3!

Trouble at Happy Trails, Book 1: Minnie Crockwell, recreational vehicle enthusiast and traveler, checks into her allotted space at Happy Trails RV Park in Spokane, Washington, with hopes of a pleasant week of touring the area. By night’s end, a death in the park finds her consoling the deceased man’s widow...or his killer. Whether the dearly departed died by his own hand or whether someone murdered him remains to be seen. It seems the deceased had a lot of character flaws. A lot!

Peregrine Ebenezer Alvord, otherwise known as Ben, is tagging along with Minnie on her travels. That he is an early 19th century ghost is only a minor complication. Ben has the ability to venture unseen where others cannot.

Minnie never imagined herself as an amateur sleuth, but with Ben’s help, she might just be able to discover the source of the Trouble at Happy Trails!

Trouble at Sunny Lake, Book 2: Minnie Crockwell, recreational vehicle enthusiast and traveler, is stressed out from the recent events at Happy Trails RV Park, and she looks forward to some relaxation at an RV park nestled on the shores of beautiful and serene Sunny Lake in Spokane County,Washington.

Peregrine Ebenezer (Ben) Alvord, her 19th century ghost traveling companion, assures her that the murder at Happy Trails RV Park is a thing of the past, and that their sojourn at Sunny Lake promises to be a pleasant and peaceful interlude.

Ben, however, cannot stop Minnie from investigating a mysterious young man who hides in one of the park cabins, nor can he prevent her from discovering a body at the foot of a lakeside cliff. All he can do is help Minnie as she embroils herself yet again in another murder mystery.

Trouble at Glacier, Book 3: Minnie Crockwell, recreational vehicle enthusiast and traveler, lucks into a first come, first-served camping spot at Apgar campground in majestic Glacier National Park, Montana. After the stress over the past few months of finding herself involved in not one but two murders, she looks forward to the serenity of the mountains. She has sworn off sleuthing forever.

Until her next-door neighbor is attacked and killed by a bear, that is. Minnie has the bad luck to be the first to discover the body. Not as bad of luck as the victim had, but bad luck nevertheless. So much for the serenity she thought she’d find at Glacier.

Peregrine Ebenezer (Ben) Alvord, her 19th century ghost traveling companion, is not so easily convinced this was a mere bear attack, and he unwittingly reactivates Minnie’s sleuthing instincts with his musings of murder and mayhem. Minnie can’t help herself. She’s off and running—on the hunt for another kind of killer.

Minnie Crockwell was able to retire at the age of 40 and decided to travel the world in her RV. She found an unusual companion on one of her first travels, and he will always be with her. Peregrine Ebenezer Alvord (Ben) is a stranded ghost from the 19th century. He represents the voice of reason and will warn Minnie of possible dangers down the road.

I’m always on the lookout for cozy mysteries, and if they are narrated by Michelle Babb, I’ll just plunge ahead without any trace of doubt that I will have a great time. This is a boxed set including the first three books in the series: TROUBLE AT HAPPY TRAILS, TROUBLE AT SUNNY LAKE and TROUBLE AT GLACIER. I thoroughly enjoyed them all. Cozy mysteries are one of my guilty pleasures, and these were ones of the best I had. The characters are quirky and interesting, and there is a spice of humor to lighten up the mood. Minnie finds herself in the middle of the investigation of three murders, and only her companion Ben can help her survive and even resolve them. The premises of the three stories caught my attention and had me guessing almost until the end. I just didn’t have enough of it and once I finished the audiobook I wanted more.

Michelle Babb makes these three stories shine, bringing the characters to live and creating different voices and styles for all of them. It is a pleasure to the ears! She also does a wonderful job transmitting the emotions of the characters and the humor in the story. The perfect narration!

I’m looking forward to the next books in the series, I just loved this one!