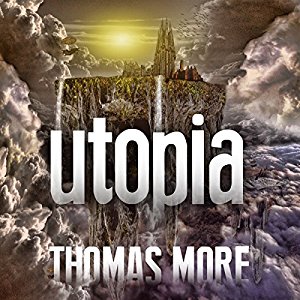 Thomas More is traveling in the Low Countries, where he meets Raphael Hythloday, who will tell him tales of a country where they have achieved perfection in many senses. Written in latin in 1516, ‘Utopia’ is a compendium of what More thinks should be an ideal society.

Even though it is slightly old fashioned (it is 500 years old!) I think it is a must read for anyone with a bit of interest in politics and sociology. This word was taken later on to describe a perfect society, even though the society described by More was far from perfect.

The book covers diverse aspects like: government, work, relationships, spare time, and war. Many of the items are very well thought, even though I do not know how realistic it would be in the end. This is a society where money does not exist, where people just need to work six hours per day, and where all is shared among everybody.

It is a kind of communism where religion is permitted, and what is more, everybody is free to chose which religion they want to practice. There is no mention of people being able to chose not to follow a religion, but I guess the options are limited, as it happens with all the rest.

Underneath all this fairness and beauty there is a dark truth: there is slavery in Utopia, and slaves, apart from being kept in chains, are the ones in charge of ugly jobs like animal slaughter, because this kind of jobs could perturb the happiness of a citizen of Utopia. Slaves were usually people who committed crimes or poor people from other countries who wished to move to Utopia. Funny how this Utopians treated their immigrants, but I guess their main goal was to protect their own interests and screw anybody who was lucky enough to be born somewhere else. I think being an immigrant can be bad enough sometimes without being categorized as a slave.

Some people find ridiculous how people chose a spouse but I do not think it is so different from what we do nowadays.

Thomas More described a perfect balanced society, perfect for the lucky ones, but also without any freedom. The idea was a good one, but I think everyone deserves the right to make mistakes and learn from them, and to be different.

Douglas McDonald did a decent job with this audiobook. I think it is not an easy book to narrate, and he did well in trying to make it enjoyable. In some occasions I could hear him breathing, I think due to being to close to the microphone, and in a couple of places there are volume variations, but for the rest the audio production was fine.

I received a copy of this book in audio format for free from the publisher in exchange for an honest review.