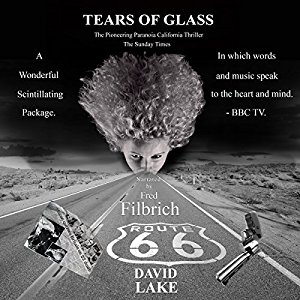 I received this audiobook as part of my participation in a blog tour with Audiobookworm Promotions. The tour is being sponsored by David Lake. The gifting of this audiobook did not affect my opinion of it.

Morgan gets a demo tape from his girlfriend, and since then it seems a wave of murders is chasing him. Someone is trying to kill him but Morgan does not know why. During his trip he will meet a girl and Paul Millns, the blues musician that Morgan has been listening to on that tape. They will become a target and escape to Europe, where they will find out that it is the CIA who is behind the murder attempts. Morgan has been mixed, without knowing, in dark affairs related to espionage.

The concept of this book is something totally new. Several tracks from this tape are interweaved with the narration, giving a special atmosphere and complementing the story. It felt unique, but somehow I think this story and the way it was told, would have worked better on screen. I tend to listen audiobooks at higher than 1x speed to prevent my attention from wandering, so I had to change the speed whenever a song was coming. It broke the rhythm for me. It is not a critique towards de book, but just an opinion from somebody who listens to books at a higher speed, as I know many people do.

I found the story very confusing, and at times I was as lost as Morgan. I think the idea was quite original, but the execution failed for me. It could be that I had troubles connecting to the characters, and I did not really care for them. I think there was something missing to bring them to life. They had interesting conversations but I found their attitudes and words annoying and not making a lot of sense.

I also had issues with the narration. I listened to the fist ten minutes one day in the evening, just before going to bed. It could be that the house was completely silent, but I was so bothered by the noises in the narration that I had to turn it off and start over the day after. At first I thought it was an artifact created by the microphone, but later I thought that those noises could just have been the narrator swallowing and making mouth sounds. For the rest, Fred Filbrich was great. His interpretation of the characters was spot on, and his accents credible.

After all the good reviews I have read about this book I am a bit disappointed that I did not get the ‘concept’. That paired with the audio production issues made this book hard for me to enjoy.