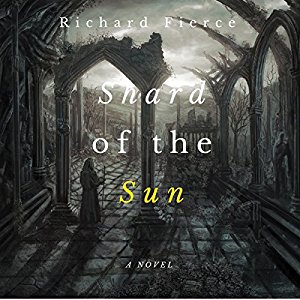 Shard of the Sun by Richard Fierce
on September 9th 2014
Length: 5 hrs and 53 mins
Buy on Amazon/Audible
Goodreads
Overal Rating:

Ages ago, sorcerers created a new sun to replace their dying one. When a shard of the sun falls to the earth, more than one takes notice. And some have intentions more wicked than others.

A powerful wizard seeks the means to defy death and heal his broken body.

The Necromancer is set on getting the justice that was never given.

Amidst everything, the shard falls into the hands of an unsuspecting woodsman named Broderick. Miracles begin to happen at his touch. The dead are raised and the sick are healed. When his cousin’s wife is captured, he sets out to rescue her and bargain the shard for her freedom. But nothing is as it seems and no one can be trusted, least of all the one he travels with.

I received this book in audio format from the narrator in exchange for an honest review.

One night woodsman Broderick glimpses what he thinks it is a meteorite falling to Earth. Decided to make some money trading it he goes to its capture. But the little object who Broderick finds is not a meteorite but a shard of the new sun, placed there by old sorcerers to replace the old one after its death. This shard has great powers and it will be sought by evil wizards.

This was a quick and easy listen. I found the fact about the sun original but I would have liked to have more information about it. There are some interesting aspects in the book but, like with the sun, Fierce just skims the surface and quickly goes to the next point. I think there is a lot of Deus ex Machina going on here, and for moments I felt that the characters were thrown here and there without much planning or foresight from the author.

I like the characters but I felt that they should have been more developed and explored. I think both Broderick and the Necromancer would have had interesting backgrounds, and this would have increased the quality of the story. I found the character’s relationships quite forced, to be honest, but that goes with what I have already mentioned: Deus ex Machina and plain characters.

I could not help but feel that some aspect were inspired on Tolkien’s books. There were goblins, swords with names, a town with a very similar name to Rivendell, and Elves with beautiful voices living on trees.

The end of the book feels rushed and it curiously constitutes the epilog. The story has not concluded though, but I am not sure that I will bother to listen to the next book when it is published. It was entertaining and an easy listen but I think more work should have been put on it to get a more polished book.

Skyler Morgan’s narration was correct and clear, but I missed some variety in character’s voices. All sounded the same, even female characters. I think Morgan would benefit in working on his voice range and interpretation skills. There was a tiny room noise on the recording but I was not bothered by it.