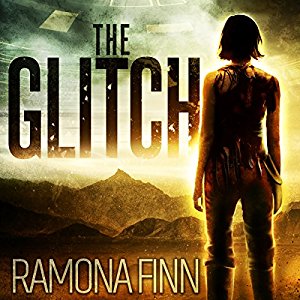 I received this audiobook as part of my participation in a blog tour with Audiobookworm Promotions. The tour is being sponsored by Ramona Finn. The gifting of this audiobook did not affect my opinion of it.

A sixteen year old girl wakes up in the desert with complete memory loss. She finds a girl in trouble close to a metallic platform and she discovers that she can connect to it. The other girl, Skye, takes her to her camp to meet her people. She struggles to recover her memories, but she remembers little more than her name is Lib. The camp is composed mostly by rogues and just some glitches. Rogues are people born outside the Norm, and glitches are former techs at the Norm but discarded due to an error of fault. Lib will try to find out who she is and why she is hearing voices in her head and having strange dreams, and also what exactly is the Norm.

I loved the concept of this book and I wanted to like it so much, but I found its execution subpar. I do not think it is because it is a YA novel, since there is romance in it but not too overwhelming. I found the characters flat and did not care a lot for them. I found the descriptions and some of the events confusing. I think this could have been a great story because there is really good material to build something big, but the book feels just a bit more than a draft. This was disappointing.

I found the memory loss a bit weird. It is unusual to forget things like the sun but then, it could be justified in this case, but then the way she talks to herself implies that she remembers more than what she really does. Not sure if I am being clear. I found it a bit clanky.

I liked how Finn has the reader guessing all the time about what the Norm is and how it works. I think this is why I like dystopias so much. But here we just get some ambiguous details about it. Plotwise, there is a long build up but I felt the end of the book rushed and rather inconclusive.

Genevieve Kaplan’s narration was correct but a bit flat. Chapters 20, 22 and 30 sound different than the rest, with clear reverberation. I also found the silence at the end of most chapters too short, sometimes shorter than the regular pause between sentences, which felt strange to the ear and broke the rhythm.

I have mixed feelings about this book. It seems interesting enough but fails in its execution. I wished to be something that was not, and that saddens me, because I foresee the same problem with the next books. I would like to see where the story goes but I do not know if I will be bothered to listen to it.