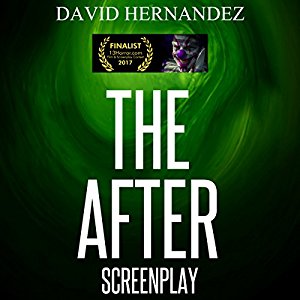 After putting his dog to sleep when he was a child, Peter became obsessed to find out what comes after, when we die. After some years he becomes a brilliant engineer and designs a machine able to capture the energy of the dying. Until now he just has experimented with small animals, but he is impatient to take the next step: trying his machine with humans.

It is written as a screenplay, naming the time and location at the beginning of each chapter. It was really like watching a short movie, and reminded me of my younger years, when I tried my hand at writing screenplays.

This was incredible well written short story. Peter’s character was very quite well developed for a story of this length (just over an hour and a half). David Hernandez knew well how to transmit Peter’s inquietude about death, and his conversations and interactions with the other characters feel natural and fluid.

We know that nothing good can come from Peter’s obsession, but I was looking forward to seeing some advancements in his experiment. The story quickly turns to pure psychological horror when Peter gets some unexpected results from his experiment.

Rick Gregory delivered an awesome narration, complementing the story and delivering it in a seamless way. He transmitted the characters emotions and his audio production was spotless.

It was a greatly enjoyable listen and I would have liked it to be a longer book. I will be watching David Hernandez closely from now onwards.