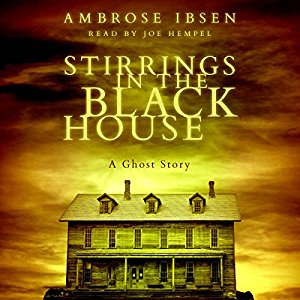 Fear is a place.
When struggling concert pianist Emil inherits a house from his late uncle, he thinks all of his problems are solved. Absconding to the mysterious Weatherby House in the suburbs of Portland where his famous uncle composed many classical masterpieces, Emil finds the place completely empty, save for one thing: His uncle's grand piano.

But Weatherby House is not the ideal getaway it appears at first glance. It has a dark past and is shunned by the locals. As the days pass, strange things occur on the property, leaving Emil to wonder if he isn't losing his mind.

Unplaceable footsteps resound in the upstairs; dark figures peer into the windows at night despite the empty acreage that surrounds the old house, and that blasted piano can't seem to keep quiet, loosing music at turns beautiful and terrifying even as no one sits before it.

In time, Emil discovers that there's something else living in Weatherby House.

And it refuses to let him leave.

I received a free copy of this book in audio format from the narrator in exchange for an honest review.

Playing piano is everything for Emil. After a breakdown some months before, he has no job nor prospects in life. Upon his death, his uncle Gustav, famous music composer, leaves Emil an old house in Portland, where Emil moves to and discovers an exceptional piano in the house living room. This could be a new opportunity for Emil and he takes it in stride, until the inhabitants of the little town close to the house start telling him about the gruesome murders committed in the house during the 70’s.

I always enjoy a ghost story by Ambrose Ibsen. He is capable of building up the right amount of tension and creating the right atmosphere to make a story startling. Even though I do not believe in ghosts, as I have a rational mind like Emil, the flow of the story caught my attention and kept it until the end. I especially enjoyed the twist, and made complete sense as the only real possibility at that point. It is one of those stories where everything falls elegantly in place.

I liked Emil, a young tormented soul with hopes to forge a better future for himself, and Kelly, the girl who introduces him to the house and stays by his side when he needs it the most. Despite not being a very long novel the characters are fully fleshed, and their actions and words feel natural and fluid.

The narration was beautifully done by Joe Hempel, bringing to life each one of the characters. Not changing them but giving them a little extra, making the book shine and become alive. Listening to a book narrated by Joe Hempel is always an unsurpassable experience.

This is my second book by Ambrose Ibsen, and I am impressed by his writing skills, not only creating characters that are alive but also places with a soul. I am looking forward to listening to his other books.