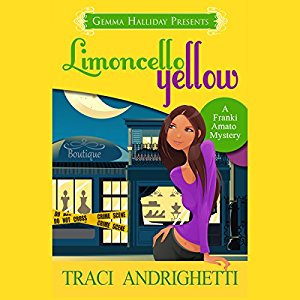 Francesca "Franki" Amato is a tough-talking rookie cop in Austin, Texas—until an unfortunate 911 call involving her boyfriend, Vince, and a German female wrestler convinces her once and for all that she just isn't cut out for a life on the police force. So Franki makes the snap decision to move to New Orleans to work at her friend Veronica's detective agency, Private Chicks, Inc. But Franki's hopes for a more stable life are soon dashed when Private Chicks is hired by the prime suspect in a murder case to find out what really happened to a beautiful young boutique manager who was found strangled to death with a cheap yellow scarf. When she's not investigating, Franki is hoping to seduce handsome bank executive Bradley Hartmann, but most of her time is spent dodging date offers from a string of "good Italian boys"—make that not-so-good aging Italian men—that her meddlesome Sicilian grandma has recruited as marriage candidates. As Mardi Gras approaches and the mystery of the murdered shop girl gets more complicated, Franki must decipher the odd ramblings of a Voodoo priestess to solve both the murder and the mystery of her own love life.

Francesca Amato decides to leave the police and her life in Texas after discovering his boyfriend with another woman. She moves to New Orleans, where her friend Veronica has a PI agency called Private Chicks. The first case with Frankie at the agency is an interesting one: a murder investigation.

During stressful times I like to turn to cozy mysteries to keep me entertained. They are usually light and funny reads, and this one is no exception. The characters were well portrayed, and I laughed hard several times at the events Frankie met.

The main plot is an interesting one, and New Orleans is an interesting place for a novel, with its rich voodoo culture and graveyards. The story kept me interested, and the intrigue was well built. I guessed who the murder was, but the way was funny and entertaining, so I don’t complain.

I had some troubles though to connect to Frankie. She was abashed at her nonna’s efforts in finding her a boyfriend. In my opinion she gave too much importance to some meaningless things. Also some of the situations were so ludicrous that were hard to believe. Nevertheless I had a great time listening to this story and it is full of hilarious moments.

Madeline Mrozek delivered an extraordinaire narration, with an ample voice range, making all the characters distinguishable, and great interpretation skills. The audio production was spotless. This is one of those cases where a good story becomes great thanks to the narrator.

I am looking forward to the rest of the series, and Mrozek can count me among her fans.