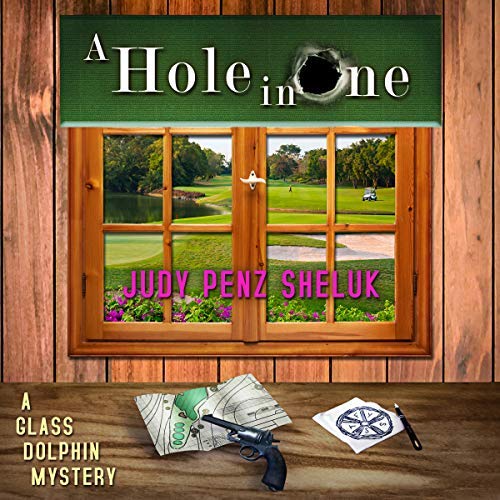 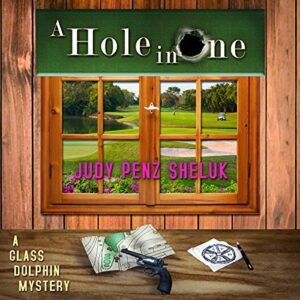 Hoping to promote the Glass Dolphin antiques shop, co-owners Arabella Carpenter and Emily Garland agree to sponsor a hole in one contest at a charity golf tournament. The publicity turns out to be anything but positive, however, when Arabella’s errant tee shot lands in the woods next to a corpse.
They soon learn that the victim is closely related to Arabella’s ex-husband, who had been acting as the Course Marshal. With means, opportunity, and more than enough motive, he soon becomes the police department’s prime suspect, leaving Arabella and Emily determined to clear his name—even if they’re not entirely convinced of his innocence.
Dogged by incriminating online posts from an anonymous blogger, they track down leads from Emily’s ex-fiancé (and the woman he left Emily for), an Elvis impersonator, and a retired antiques mall vendor with a secret of her own.
All trails lead to a mysterious cult that may have something to do with the murder. Can Arabella and Emily identify the killer before the murderer comes after them?

After enjoying ‘Than Hanged Man’s Noose’ so much, I was eager to continue listening to Emily and Arabella’s adventures. There’s a golf tournament celebrated in Lount’s Landing, and the Glass Dolphin is participating as a sponsor. The atmosphere is festive and relaxed until Arabella discovers a body close to one of the holes. The dead man is no other than Arabella’s husband’s father. This is why the book feels more centered around Arabella than Emily, but there are still plenty of moments where the two girls investigate together.

I had a great time listening to this cozy mystery. The inhabitants of Lount’s Landing are already like old friends to me, and the several twists and turns in the story kept my attention until the end. It was clever how many of the characters were related, and this made the story more interesting and intricate. Judy Penz Sheluk creates fully fleshed characters and weaves interesting stories with great style.

What felt strange was that this book is narrated by a different person than book one. I didn’t feel very attached to the narrator or the first book, but even like that, it felt off (it always does when changing narrators mid-series). Kelli Lindsay’s voices and interpretations were very good, which made the dialogs flow easily, but in general, I found her reading a bit clunky and with some pauses where there shouldn’t have been any. Kind of like trying to read a text instead of narrating a story.

I am looking forward to more sleuthing by Emily and Arabella, and more stories and curiosities about antiquities and female entrepreneurship.

2 responses to “Book Review: A Hole in One by Judy Penz Sheluk”